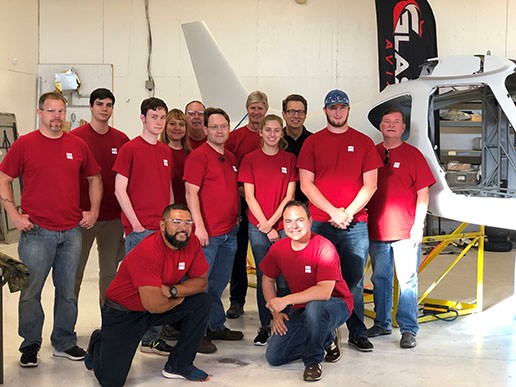 This is the sixth year that the association (a.k.a. GAMA) has partnered with the local business to help kids construct a plane.The competition begins with GAMA sending software to hundreds of schools across the nation that give students a challenge of how to fly and design a plane.

"They have to modify and design the aircraft to be able to carry the most air load and that is the most fuel efficient," said Pete Bunce, president and CEO of GAMA.

The first-place team gets to have four students, at least one of whom has to be a woman, fly to Washington state where they build a plane in two weeks at Glasair's Arlington Airport hangar. They start with just the fuselage (main body of the airplane) and eventually get to taxi the plane in two weeks of work.

This year the volunteers came from the primary sponsor of this year's program, Click Bond, a company that produces fasteners for airplanes.

"GAMA has really done something fantastic in having this aviation challenge," said Click Bond president and CEO Karl Hutter. "Being able to connect with the kids and the industry with this way has been awesome," he said. Click Bond will take the plane after the FAA certification is done.

"This will serve as an ambassador to the industry, traveling around to different trade shows and events and will hopefully be used for Young Eagles flight to get kids flying as well," he said.