After four years, Patrick completed his first apprenticeship, graduating to Toolroom Toolmaker 1 at the start of 2022. 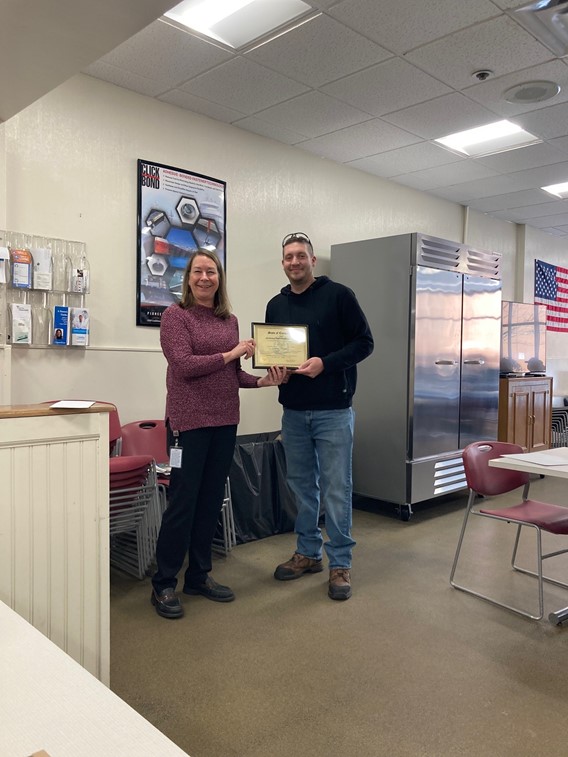 In fall of 2017, Patrick Harrison had just finished his apprenticeship in commercial roofing with a large Connecticut roofing company. “I soon found out that roofing is not a very good business in the winter,” he laughs, explaining that the company often closed during the coldest months of the year, which, for a man with a young family, isn’t a good path toward financial stability. He considered his career options, and his uncle, Dale Harrison, led him to Click Bond.

“He was a toolmaker in this building (the Watertown facility) when Click Bond bought it in 2009 and had stayed on with Click Bond,” Patrick says. “He said, ‘There’s a position open here, why not try it out?’ I saw it as a short-term loss, since I had finished a roofing apprenticeship, but a long-term gain to work with Click Bond.”

His instincts were correct. Patrick applied and was accepted, then began an Eyelet Toolmaker apprenticeship under the late John Fayer in December 2017.

“My impression was that this was a solid program,” Patrick recalls. “The employees at Click Bond are very welcoming; it’s more of a family. I came from roofing, where someone was always screaming at me, ‘Get it done! Get it done!’ Click Bond has a totally different feeling. Someone was always willing to help me here.”

Soon after his apprenticeship began, however, the Eyelet division experienced a slowdown in work. Patrick’s skills were more needed in the Toolroom, where he could complete more work hours, so he moved upstairs and began informally training there. Soon, Patrick was considered a dual apprentice, training in both Toolroom and Eyelet Toolmaking. His schedule also changed; he moved from first to second shift, so that he could work with more experienced Toolmakers and have better access to equipment.

While he completed his training in the workplace, his apprenticeship also included studies in toolmaking at the Manufacturing Alliance Service Corp. facility in Waterbury.

After four years, Patrick completed his first apprenticeship, graduating to Toolroom Toolmaker 1 at the start of 2022. Meanwhile, he is continuing his Eyelet apprenticeship, which he expects to also complete this year, though, like the entire journey, it is somewhat unpredictable. “I don’t know that there’s a set time frame for finishing [this apprenticeship],” he says, then jokes, “I guess someday I’ll go downstairs when they want me to rebuild one of their machines and get a job running. Then they’ll give me my certificate!”

Patrick is happy to keep learning and growing with Click Bond. He says his ultimate goal is to become a lead or senior Toolmaker with the company. “I enjoy it!” he says. “I’d recommend this to anybody. I plan on retiring from Click Bond!”

Congratulations to Patrick for this outstanding achievement!