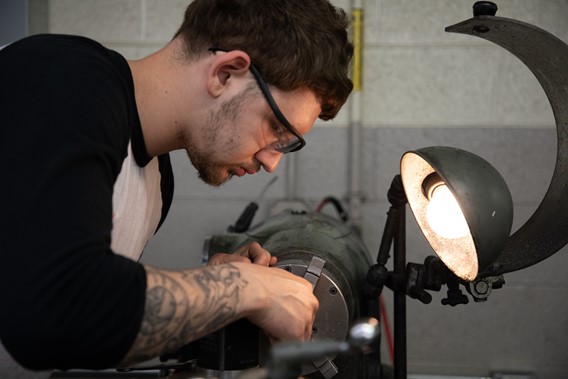 After four years of hard work and dedication, Tyler Baptista graduated from Click Bond’s rigorous Eyelet Toolmaker Apprentice Program at the end of 2021.

Toolmaking runs in Tyler Baptista’s family. His grandfather, John Baptista, was a toolmaker for over 30 years in the Watertown building, and when Click Bond took occupancy and set up its toolmaking facility there, John stayed on and became a Click Bonder. He enjoyed the work so much that when his grandson, Tyler, was considering what direction his career should take, John suggested he apply for the apprenticeship. Tyler applied in early 2017 and was accepted, and he began his program later that year.

Though Tyler’s grandfather was diagnosed with cancer that same year and, following his recovery, retired from Click Bond, his encouragement and the joy he derived from his work inspired Tyler, although he had little idea what toolmaking actually was. “I was thinking hammers and wrenches and stuff,” Tyler laughs. “I just thought he worked in a factory putting tools together! So on my first day, I was kind of overwhelmed. But I kept hearing how nice the people here are, and that was true. Everyone was willing to help. From day one, people were trying to teach me things, and I just had a really good feeling about it.”

The program not only involved full-time, hands-on learning while on the job, but apprentices also must complete 530 hours of classroom instruction at the Manufacturing Alliance Service Corp. facility in Watertown, which broke down to six hours in the classroom per week.

Tyler says that while he did get the hang of eyelet toolmaking, he remained challenged by the work and discovered that there was always more to learn, which is part of what he enjoys about the job. “Some of the guys have been doing this for 20-plus years and sometimes they still need help from others. But it’s a great environment and everyone really works together here.”

Though he has graduated and earned the title of Eyelet Toolmaker I, Tyler intends to continue learning as much as he can from his coworkers, many of whom will soon be approaching retirement. “The more I learn, the more valuable I can be moving forward, long term,” he says. “I just want to be as good at this job as I can be.”

Congratulations, Tyler, for your impressive accomplishment!